Hello,
I promised you a little peek into traditions in this part of Europe:
One of the rather popular ones is celebration of St. Nicholas (little Christmas preview as I call it), which is not just Czech speciality. In the Christian calendar, the feast of St. Nicholas falls on December 6. His cult gradually spread throughout Europe (Austria, Bavaria, Hungary, Netherlands, Belgium, Russia, parts of France, Slovak) and the world. Today St. Nicholas is the patron saint of several countries, territories and towns, plus a number of professions and trades, mainly students, sailors, merchants, pharmacists, solicitors and lawyers. 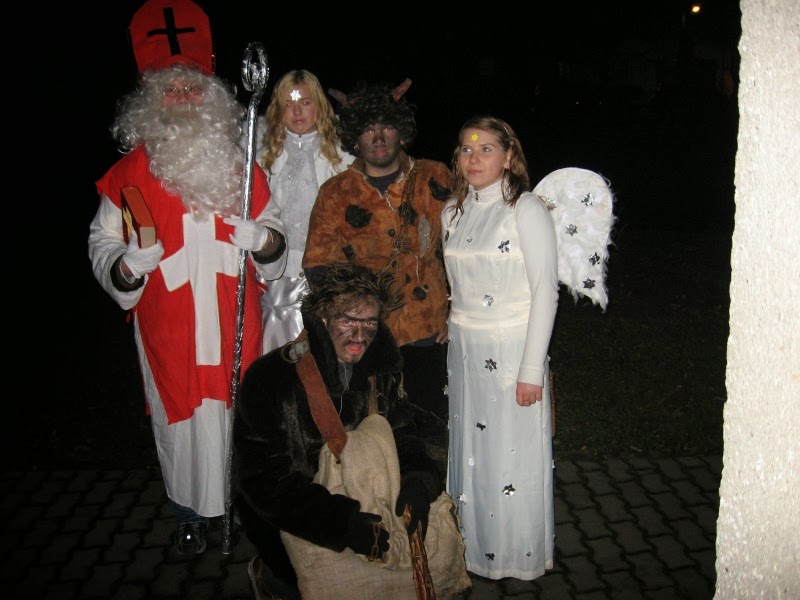 In most countries, Nicholas comes to homes already on the eve of his feast, to check how the kids behaved in the last year. A lot of children can look forward to smaller toys, sweets and fruits, the naughty ones get the potatoes or piece of coal, but in practice they remain only with this warning.
Personally St. Nicholas (a long white hair, white bearded old man, who should evoke a feeling of wisdom, kindness, respect for age and consideration) visits children in nurseries, schools and at home. He carries with him big book of sins – so he knows who was good and who was bad. The kids have to say some poem or sing little song to get the treat. 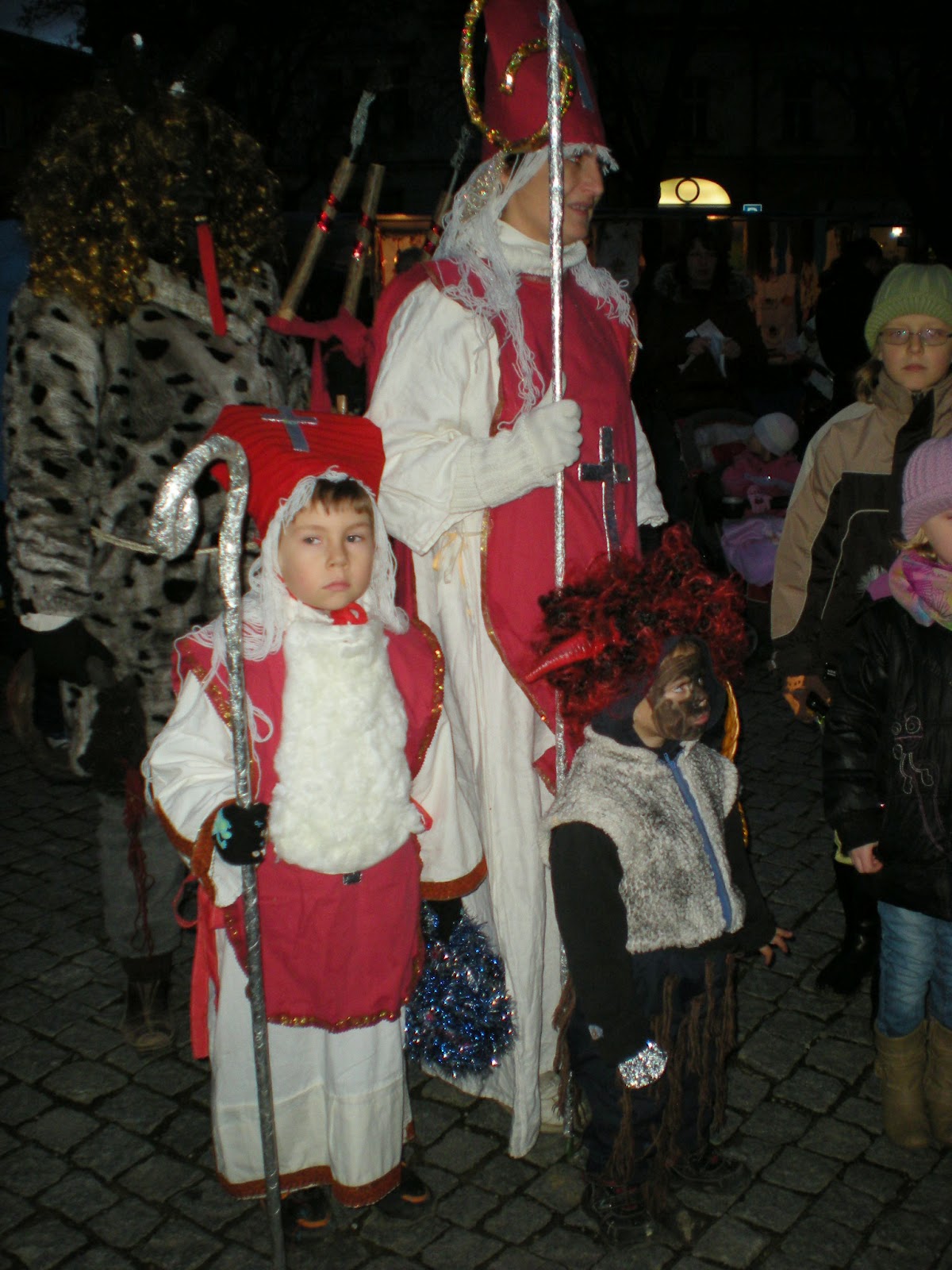 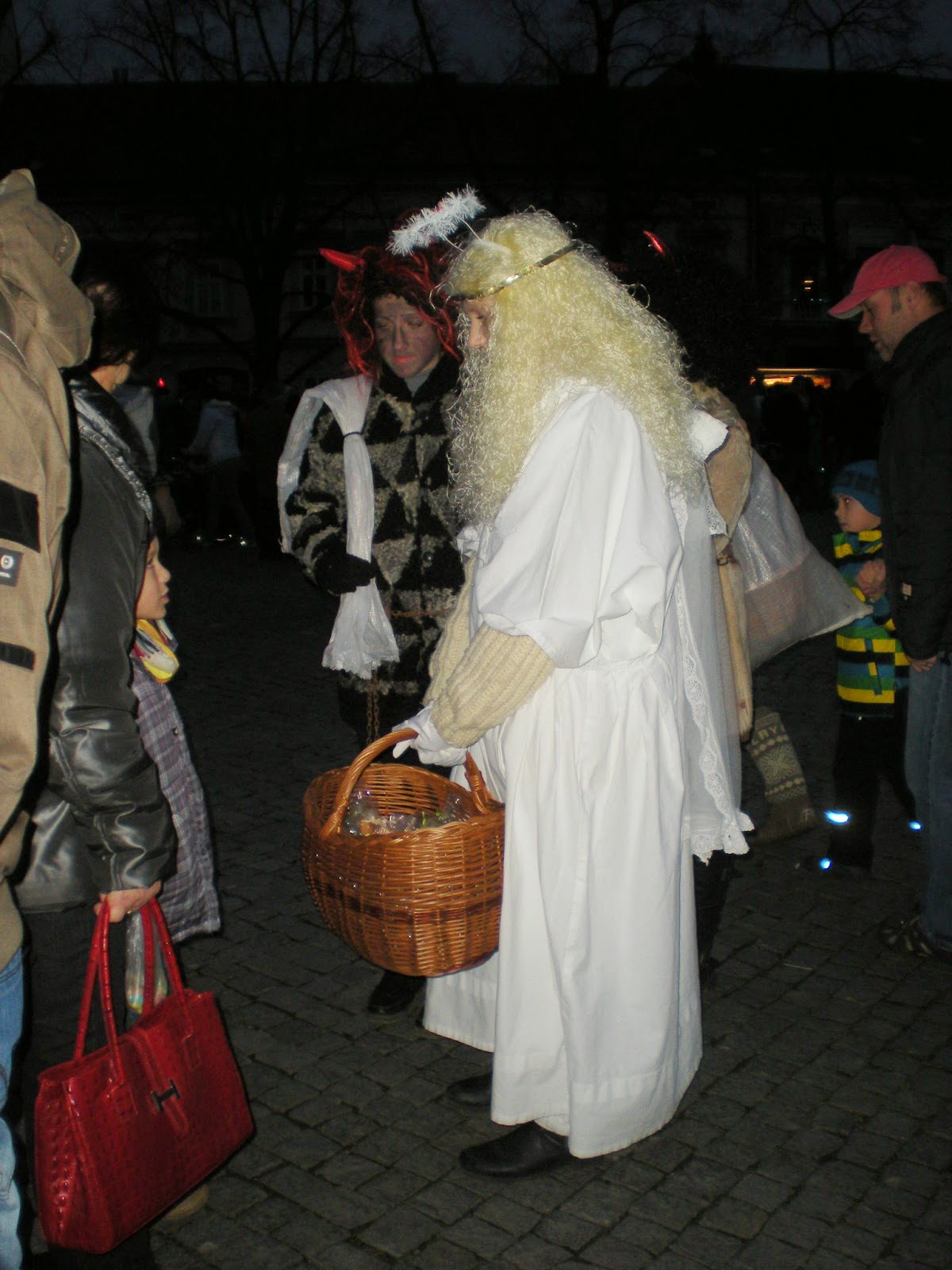 Regional differences remain in the composition of Nicholas' entourage. One of his assistants is the most common Devil or Devils (who supposed to represent the evil in all of us), whom St. Nicholas allegedly domesticated. The Devils are stupid and silly but underestimating them does not pay off.
The other assistant is usually Angel or Snowflake, and is the epitome of beauty, tenderness and humility. Or is it? 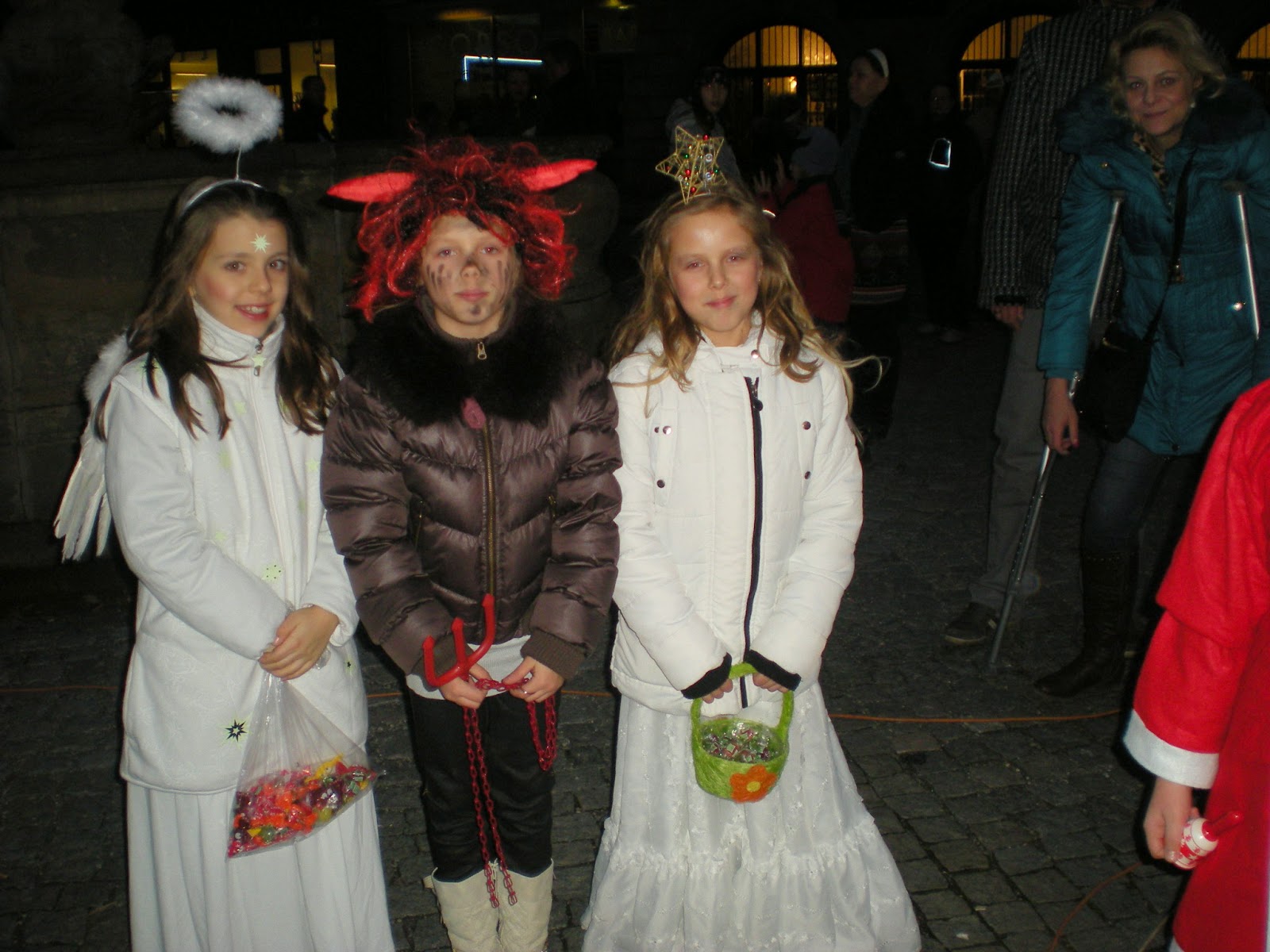 In reality, at evening a lot of adults and children gather together on main squares of their hometowns. There are many Nicholas’s, Devils and Angels walking around giving away for free sweets, fruits and potatoes (not coal as that’s expensive this days) to the children (or really to anybody who will sing or say the poem to them). The city Councils and Churches sponsor it all. 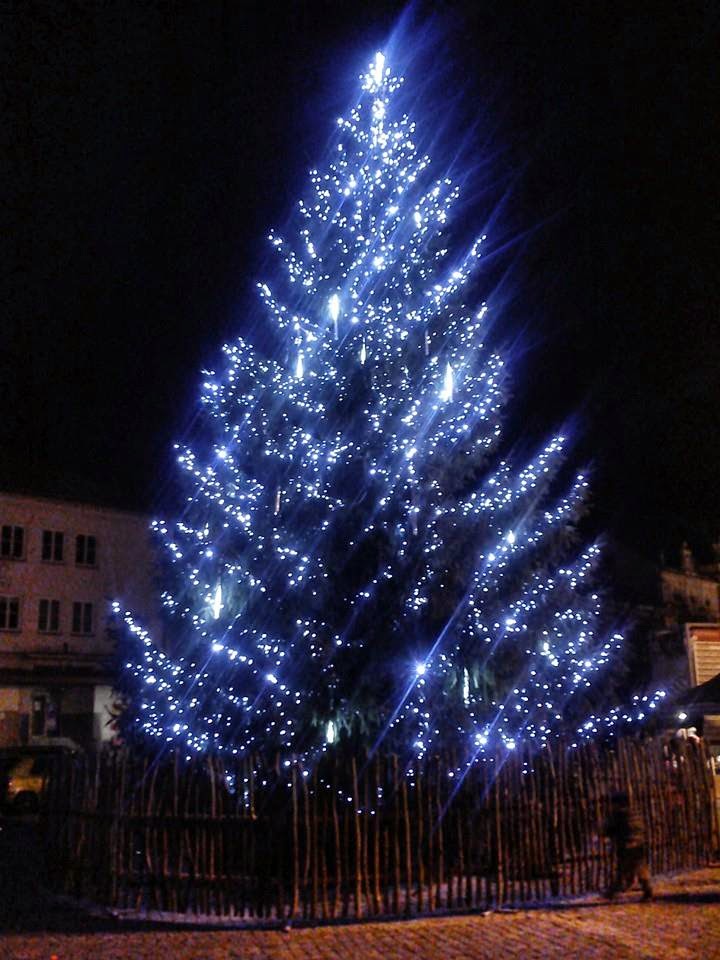 Everybody is waiting for the Christmas tree lights to be turned on since 5th of the December is meant to be the official day to do so. I know business is business, so in the cities and big towns the tree lights are already on, but this is little traditional region, so it is done according to real tradition. 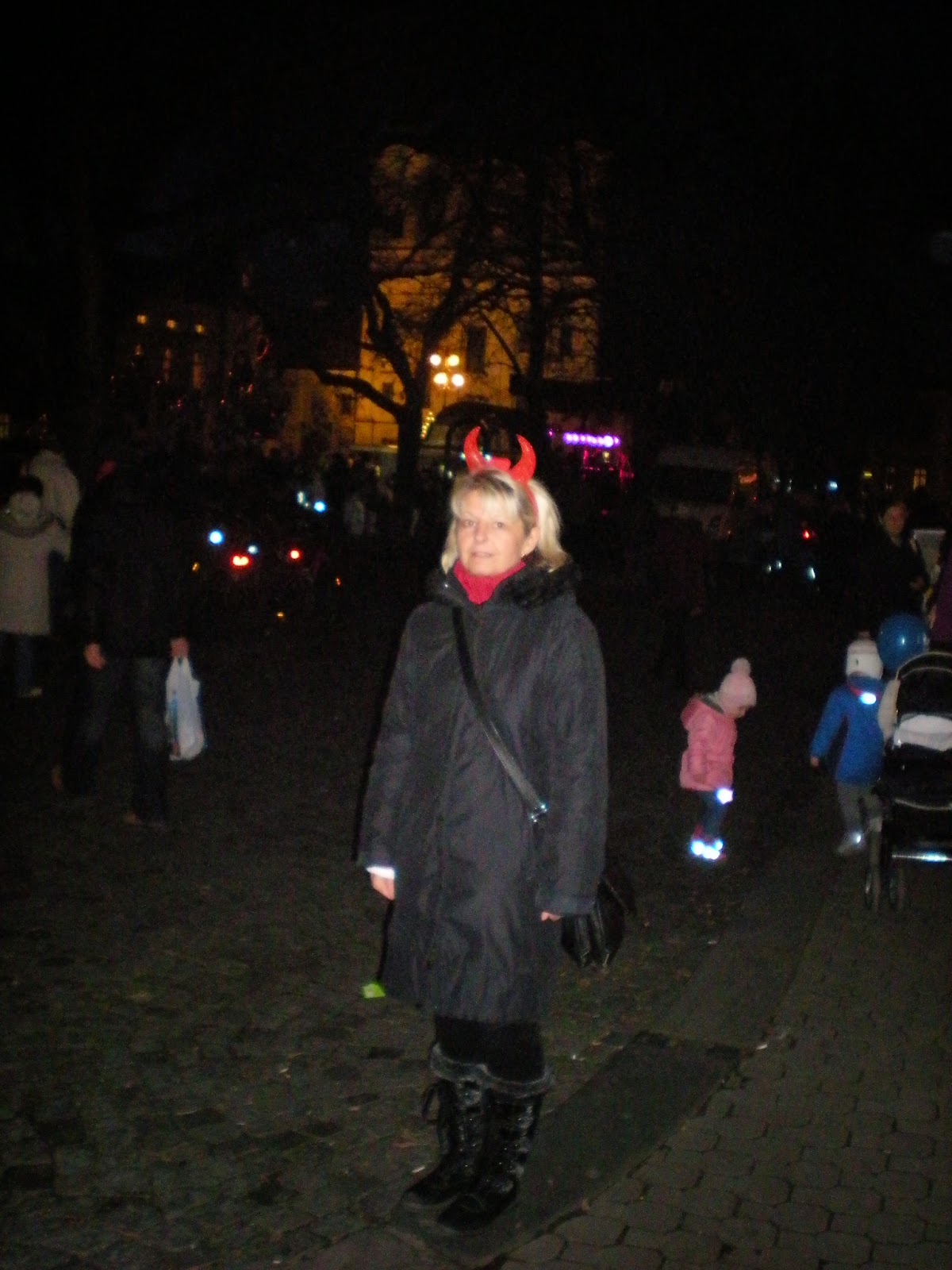 It’s lots of fun and not only for children. Even I had to put some flashing Horns on. What a pity, we don’t celebrate it in England. My husband is saying it’s just other excuse to get merry. I have to admit the Czechs are very creative in finding something or anything to celebrate at any time.

View my complete profile
Hello! I am fifty something year old Czech born, Australian girl, living in little town surrounded by vineyards on Czech/Austrian border. I live with my English husband and very fast growing little girl. Welcome to my blog, where I like to share with you my great passion for crochet and simple country living in this beautiful wine region. Lovely to have you here viewing my page. Clara

Buy me a coffee